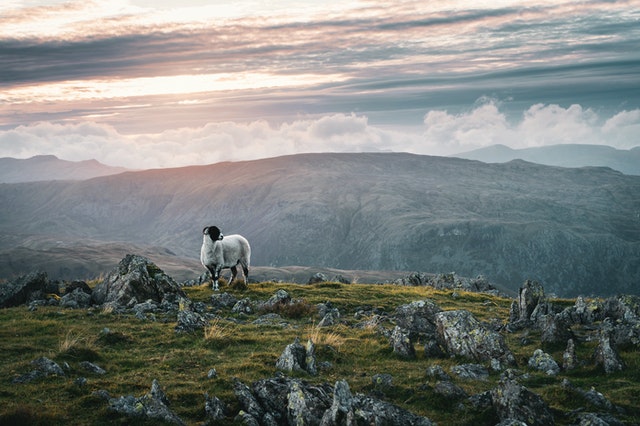 Is Christianity easy or hard? Will it make you good friends, bestow cool new powers, a rewarding life, great future prospects, or deny you all those things? Will it put you on good terms or bad with the governing authorities in church and state? Is it a joy or a slog?

Lutherans, you know the answer to such either/or questions, right? Can I get a Lutheran “Yes!”. Thank you.

Yes. Christianity is easy and hard. It will be the death of you and eternal life for you. It will make you great friends, give you super powers, the best prospects possible and deny you all those things. It will make you frenemies in church and state who will hear you with greatest interest, promote you, and then kill you. It’s the best. It’s the worst. And it is all of those things at the same time, all four seasons in one day!

The vicar preached an excellent sermon last week on how Matt. 28:16-20 is not a great commission but the ordination of the 11 as the first pastors of the New Testament. I have just one slight correction. It was actually their re-ordination…

To use a golf analogy: the Apostles were re-teeing and re-hitting after their first drive went out of bounds (that whole business with the cross, the apostles running away, denying, hiding, doubting Jesus and His Resurrection was a very wayward drive). Standing on the tee—uh, er, the mountain in Galilee, the Apostles are hitting their third: one in the woods, penalty two, so they will lie 3 in the world—let the golfer understand. Your provisional ball splits the fairway (after your first goes in the woods). Your playing partner goes: “that second guy is a great player!”. And you give him the Hawaiian good luck sign.

I digress more and less profitably than the vicar, sometimes. Anyway…

Going through all the cities and villages of Israel, going to their synagogues proclaiming the Gospel of the Kingdom, healing every disease and affliction, Jesus has compassion because they are harassed and helpless, like sheep without a shepherd. So, to give you an elegant takeaway for this Gospel as the vicar’s quite lovely one last week (ordination not commission, giving of a gift, not demand for more labor) Jesus is today re-gifting them: Shepherds for Lost Sheep.

That’s what the Apostles, the Pastors of the New Testament are, no more and no less. Shepherds for Lost Sheep. The pleasure is all (well, mostly all) on the sheep’s side of the table, though their calling will mirror the same paradox of joy and slog as their shepherd’s calling. Pastors are Jesus’ hands and feet and mouth and voice in the world. When you hear me, you are hearing Jesus (as He tells 70 other pastors in Luke 10). When we’re dragged before governors and kings as martyrs for Jesus (that’s literally the Greek word for “bear witness”!) we are not anxious because it is not me who’s speaking. No, what I need to say is given to me in that hour of martyrdom/witness (a.k.a. the Divine Service!). It is the Holy Spirit of the Father, the Spirit of Jesus speaking through me…

Another aside; sometime, I really need to tell you what it is like to actually write a sermon, teach a bible study. It’s not like giving a speech in a college class or a business meeting. It’s weird. It’s more like automatic writing (as some of my favorite writers attest happens sometimes with their best work). Someone Else seems to be moving your hands on the keyboard, your mouth in class. You plan to go one way with the Bible study (a charming and winsome way, always), but the words come out all wrong, or all different, or all right? And sometimes the audience loves it. Sometimes they all just hate IT. You want to say “It’s not my fault! I’m a man under authority, for Christ’s sake! Send your complaints to Him!!!”

See, the shepherds are at the same time lost sheep ourselves. It’s not like Jesus first gets us saved, found, all straightened out, and then sends us to the flock. No. He sends us just as we are, just as confused, lost, screwed up as you all are. As one of my teachers said: “it’s not that first we believe and then worship. First, we worship, then we come to believe.” As we heard last week: the disciples on the mountain worshiped Jesus first, while also doubting. The worship always comes first. Only slowly do the doubts resolve; but, if you wait for the doubts to go away, you’ll never worship! If the shepherd waited till he was all straight on how to care for sheep, he’d never start, never lead a single service or preach a single sermon or teach a single class. We’re always figuring it out on the fly (trade secret there, don’t tell anyone, OK?).

That same teacher of mine (it was Aidan Kavanagh) went on to say: “It was a Presence, not faith, which drew Moses to the burning bush, and what happened there was a revelation, not a seminar. It was a Presence, not faith, which drew the disciples to Jesus, and what happened then was not an educational program but his revelation to them of himself as the long-promised Anointed One, the redeeming because reconciling Messiah-Christos. Their lives, like that of Moses, were changed radically by that encounter with a Presence which upended all their ordinary expectations. Their descendants in faith have been adjusting to that change ever since, drawn into assembly by that same Presence, finding there always the troublesome upset of change in their lives of faith to which they must adjust still.”

So this is what Shepherds for Lost Sheep are always doing: we are drawing you into the Presence into which we ourselves have been drawn, not so much to teach, guide, or straighten you out, but to get taught, fed, guided, found alongside and with you, ourselves—like the guinea pigs who show how the experiment goes…

The Word invents us, not vice versa. The first word is always the three fateful ones that upend all lives: “I met Someone…” You have met Him too. It has changed our lives. It will change yours. Will the change be happy or sad? Yes…

First, we worship Him, because the Presence simply demands it. Peter, in the first Divine Service, after the miraculous catch of fish, fell on his face and confessed, begged: “Depart from me Lord, for I am a sinful man.” And Jesus said… “No. Follow Me. You don’t get off so easily.”

“Feed My lambs. Tend My sheep. Over all a watch to keep. Lead them on; bring them home, as a loving shepherd of the Lord.”

Only worshiping do we come to love Him. Only loving Him do we follow; and only following do we finally believe. The shepherds are getting sorted out, on the way, just like the sheep. But we’re called to be the leaders: in worship, in saying the words, speaking the Gospel of Peace, the Way of the Cross. We are first… to be flogged in the synagogues; first… to be martyred by governors and kings; first… to fall by Herod’s sword.

And if not first in the hearts of our countrymen, then, at least, first to say: “Hey! that wasn’t so bad! I mean, it was bad, but in kind of an awesome Way! The fire burning up that bush, on the altar, filling the House with Billowing Smoke? IT purifies. Does it kill? Yes! it kills: it kills the sin, the sickness, the despair, the doubts—that all dies, living with Jesus.

Shepherds for Lost Sheep; kind of lost ourselves, but found. Following Him—without gold, bag, staff, worldly wisdom—we point the Way to something Better. Something holy, heavenly, and high. Something like Peace, surpassing understanding, guarding heart and mind in Christ Jesus. Always. Amen.