Jesus says: “Ask, and it will be given to you; seek, and you will find; knock, and it will be opened to you.” One of the most beautiful lines in the holy scriptures. But, to quote Ian McKellen playing himself in “Extras” “Hmm: how would I do that?”

Well, Abraham shows us how to make The Ask in our Old Testament lesson today [a real beauty worthy of your undivided attention].

Previously, in the book of Genesis: last week, the LORD Yahweh, incarnate in Jesus the Christ, comes to Abraham (appearing out of our time continuum, sci-fi style, a couple millennia or so before his birth in Bethlehem, but remember: the LORD isn’t bound by the whole space-time thing the way we are, so, just let art flow over you—it is Jesus, in the flesh, I promise, appearing to Abraham!). Jesus has two messengers with him, angels or beatified men with superpowers (take your pick—think Marvel superheroes, only better). Out of his household of hundreds, Abraham alone recognizes the LORD of heaven and earth. So, he races (like Martha) to the hearth to prepare a meal for Him, and then (like Mary) he stands by (more polite, more eastern-old school to stand than to sit in church, actually; Mary does it Western style, Abraham, being from the East, goes full-on EO) attending to the Word. Service and worship beautifully combined by the father of faith, focused purely on the LORD.

Being an agent on His Majesty’s Secret Service (think 007) has its glory and honor. And by being literally caught up in Divine Service through faithful worship, Abraham becomes an agent of His Majesty’s government, an insider, a member. And membership has its privileges as we’ll see today…

This is where we pick up the story this morning: the two men with Jesus arose and looked toward Sodom, and Abraham went with them to send them on the way. And the LORD says, “Shall I hide from Abraham what I am doing, since Abraham shall surely become a great and mighty nation, and all the nations of the earth shall be blessed by him? For I have known him, in order that he may command his children and his household after him, that they keep the way of the LORD, to do righteousness and justice, that the LORD may bring to Abraham what He has spoken to him.”

By the Divine Service (God calling and promising Abraham great blessings, and Abraham in turn reflecting those great gifts back to the LORD in table fellowship with God) Abraham has become an agent on His Majesty’s Secret [Divine] Service. He did not choose this for himself, but God chose him, called him, put him on the way (and this is the way)! By the Word, the LORD calls; and when we answer in faith: “speak LORD, Your servant hears” (that is: we’ll do whatever He tells us, happily, faithfully) then we are agents on His Majesty’s Secret Service (think Bond, but better—a license to live forever rather than to kill…).

The LORD continues speaking to Abraham: “because the outcry against Sodom and Gomorrah is great, and because their sin is very grave [that sin would be the whole hyper-aggressive toxic-narcissist homo thing, which, contrary to prevailing sentiment’s actually not OK. Read Midge Decter’s “The Boys on the Beach”] the LORD says: “I will go down now and see whether they have done altogether according to the outcry against it that has come to Me; and if not, I will know.”

Then the men turned away from there and went toward Sodom, but Abraham stood still before the LORD. And he must have had a worried look on his face, because, you may recall, Abraham’s beloved nephew Lot and his family lived in Sodom! And Abraham’s thinking “Roh-oh Scoob! This sounds fairly… ominous” This is curtains for Sodom and Gomorrah, and Abraham knows it.

Now, where my first thought would be “cool—fire from heaven, destruction of pagans!” Abraham’s is “Oh, no! My poor nephew!” Now, Lot’s not the best guy, let us recall. He went to Sodom because the part of Canaan they were in back in Genesis chpt. 13 was a little… scruffy. Abraham and Lot stand on high ground and Abraham gives Lot his choice and Lot sees the plain of the Jordan is well-watered, well-populated, high-end living, and takes the choice spot, while Abraham is content with the hilly hinterlands.

I was talking to a California refugee family last week (they’d fled to Idaho). The wife was a native and said California (especially San Francisco) is absolutely gorgeous, though it is a terrible and sinful place, too. But, our good friend Peter stays, because, I guess, like the frog in the slowly boiling pot, it’s tough to jump out when it’s so beautiful and has so many amenities and lovely features. The lure of Sodom is strong, even for the faithful…

But Abraham knows the place is a deathtrap, doomed to fire from heaven (and brimstone!) baby!

And thinking—as befits a patriarch—of others, first, Abraham asks the LORD: “surely You won’t destroy the righteous with the wicked?”! Probably Abraham’s thinking: “Hey; there’s an LCMS church in San Fran… uh, Sodom, right near Lot’s house. OK!” and goes: “So, if there were 50 righteous, You’d spare it for their sake, right?”

Then (in the NIV) Abraham thinks again: hey, wait; I think maybe that congregation’s ELCA? Huh; OK: “What if there were five less than fifty?” God’s like: “for 45, I’d spare it”. Then Abraham’s like: hmm; looked pretty classy; probably Episcopalian? “How about 40? “40’s a good number” says the LORD. Then Abraham thinks: no, it might be Eastern Orthodox? “30?” “Safe with 30” says the LORD. Or is it Roman Catholic? “Uh, 20?” “20!”. Hold on. I think it might be one of those nondenom denoms, one of those “Reformed Groups”. “What if it’s only 10?” “I’ll spare it for the sake of 10,” says the LORD, but Abraham can tell (by looking at God’s face) he’s reached the limit. But those big box nondenoms draw crowds, right? Surely there are 10 righteous there?!

Well; you know how the story goes. There’s only 4, so we get the whole fire and brimstone deal—an athletic ending.

But what is our takeaway? That it’s hard, leaving California? Well, for me, it’s in how Abraham makes The Ask. He doesn’t presume to tell God what to do. He just asks… questions: “Would You destroy the city if 50 righteous were there? Shall not the Judge of all do right?” And I think Abraham can tell by the LORD’s face that the numbers are all… too high. But he keeps asking till he sees: the LORD is not to be questioned—only worshiped, adored.

Now, this is the way, Mandalorians, er, Christians!

In our Gospel today [because, apparently, no one was paying attention to the Sermon on the Mount?] Jesus teaches us (again) how to pray. And he boils The Ask down to 3 simple petitions in the Lord’s Prayer: 1) hallowed be Thy name, 2) Thy kingdom come, 3) Thy will be done—3 aspects of the same single thing, the one thing needful…

Now, I’m not a huge fan of the Great Dane, but Kierkegaard defined the one thing needful as faith; and faith he defined as purity of heart—to will just one thing.

And when we will just one thing—whatever God wills!, even if it’s our death or Sodom’s destruction—faith has its way with us. This is what the Divine Service does: it makes God’s will ours. Just so, The Ask is made: God’s Name is hallowed, His Kingdom comes, His will is done, and you’re fine—even if your bones get unstrung, you’ll be spit out, reborn, in a world made new, for you. In the Name of Jesus. Amen. 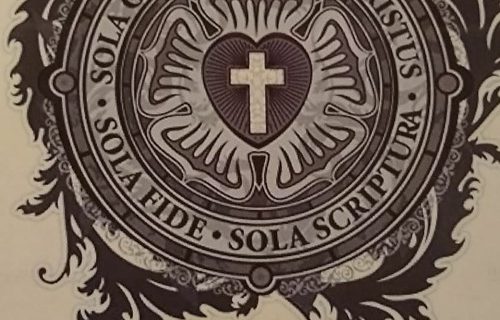