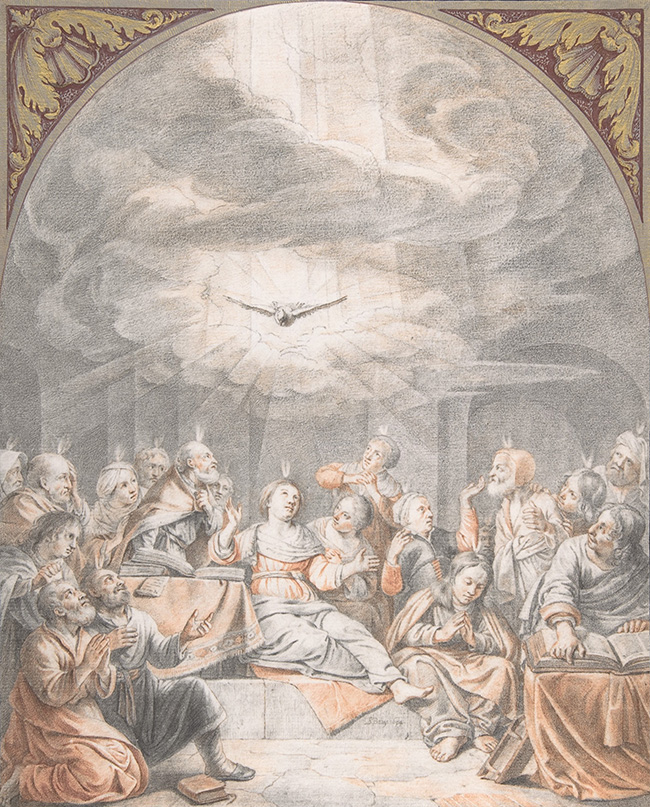 Since we left off with a scene from Narnia last week, it seems fitting that we should begin with a scene from there. This one’s from “The Silver Chair” and based exactly on our Gospel today about coming to Jesus if you’re thirsty to drink and how, uhm… frightening, but necessary and life-giving it is—how it is frightening in a whole different way…

Jill Pole and her friend Eustace Scrubb are being chased by a gang of bullies at their progressive prep school when they duck through a door in a wall to escape, and end up not on a cold, grey English moor, but in the sunlit uplands of Narnia—on an impossibly high mountain, from which Jill has just caused (by carelessness) her friend Eustace to fall off into the depths. But, as he’s falling, a huge, golden Lion comes and blows him with His breath into the unseen distance.

Jill is shaken, not stirred, by the experience. She’s frightened of the Lion, racked by guilt, blaming Eustace for his fall by taking them into an unsafe area. She’s also tremendously thirsty. But when she comes to a lovely, clear, flowing mountain stream, she faces a serious conundrum.

We’ll let Lewis take it from here… “She didn’t rush forward to drink. She stood as still as if she had been turned into stone, with her mouth wide open. And she had very good reason; just on this side of the stream lay the lion. It lay with its head raised and its two forepaws out in front of it, like the lions in Trafalgar Square. She knew at once that it had seen her, for its eyes looked straight into hers for a moment and then turned away—as if it knew her quite well and didn’t think much of her…” Jill lingers and stews until:

“…the thirst became so bad that she almost felt she would not mind being eaten by the lion if only she could be sure of getting a mouthful of water first.

‘If you’re thirsty, you may drink.’

“For a second she stared here and there, wondering who had spoken. Then the voice said again: ‘If you are thirsty, come and drink,’ and of course she remembered what Scrubb had said about animals talking in that other world, and realized it was the lion speaking. Anyway, she had seen its lips move this time, and the voice was not like a man’s. It was deeper, wilder, and stronger; a sort of heavy, golden voice. It did not make her any less frightened than she had been before, but it made her frightened in a rather different way.

“Are you not thirsty?” said the Lion.

“I’m dying of thirst,” said Jill. “Then drink,” said the Lion. “May I—could I—would you mind going away while I do?” said Jill. The Lion answered this only by a look and a very low growl. And as Jill gazed at its motionless bulk, she realized that she might as well have asked the whole mountain to move aside for her convenience. The delicious, rippling noise of the stream was driving her nearly frantic.

“I daren’t come and drink,” said Jill. “Then you will die of thirst,” said the Lion. “Oh dear!” said Jill, coming another step nearer. “I suppose I must go and look for another stream then.” “There is no other stream,” said the Lion. It never occurred to Jill to disbelieve the Lion—no one who had seen his stern face could do that—and her mind suddenly made itself up. It was the worst thing she ever had to do, but she went forward to the stream, knelt down, and began scooping up water in her hand. It was the coldest, most refreshing water she had ever tasted. You didn’t need to drink much of it, for it quenched your thirst at once. Before she tasted it she had been intending to make a dash away from the Lion the moment she had finished. Now, she realized that this would be on the whole the most dangerous thing of all…”

She and Aslan become friends through the drink. And I’d like to tell you she luxuriated in Aslan’s country, had a pleasant, easy time of it. But Aslan blew her into Narnia, where, with Scrubb, she faced a dangerous journey across mountains, deserts, to underground cities ruled by a wicked Queen, man-eating giants, earthmen, snakes. Why did it have to be snakes?

These last couple months I haven’t made the transition from Fear 1 to Fear 2 smooth. Pretty jagged. Screwed it up 7 ways from Sunday and I’m sorry! I was trying to pretend the two kinds of fears—1) fear of losing our life, for Christ’s sake! and 2) fear of not trusting wholeheartedly in Jesus could peacefully co-exist. I’ve wanted to be all things to all people so as not to disappoint any. But Lewis reminded me that, at some point: fear of the world has to give way to fear of God. You can’t both avoid Him and draw near. The first fear’s the worst and makes us fearful. The second Fear’s the best; it’s life-giving—IT makes us heroes for more than one day.

The catechism says that we should never treat the Sacrament of the Altar as something harmful from which we should flee, but as a pure, wholesome remedy that benefits body and soul. But, hmmm… how would I do that, exactly?

Think of it this way: say you’re walking the streets of old Jerusalem (in a time of deadly plague) and Jesus Himself meets you at the corner; says, “You look like hell! Come with Me, jam into the Upper Room with Me and My friends, to eat My Body from My own hand, to drink My Blood from My One Cup; and you will never hunger, never thirst, again!” Would you say: “That’s not safe, Jesus! Can’t I just sit home and commune with You on video? Could I have my own individual shot glass?

Can you hear the Lion’s growl? Do you like that sound? It’s the only thing you should be afraid of! Jesus never promises that He won’t do anything to you, if you come. He says whoever saves his life will lose it but whoever loses her life for Christ’s sake will ever surely find IT!

There are many factors in our dying: old age, cars, booze, pills, pastry, viruses. Long list. But there’s just one cause: sin. And only One Remedy: Jesus!

Jill was frightened, drinking with the Lion, but frightened in a different way. Let’s discover that different Way together, shall we? You’ll find it where Isaiah found it: in the Divine Service, whole House shaking at the sound of His Voice, filled with smoke from the Fire on the Altar. You’ll find it where Noah found it: in the water of that Font that flooded the world to wash away its sin. There is no other stream. So, if you’re thirsty… you know where to be. In Jesus’ Name. Amen.

2nd Sunday After The Epiphany

Baptism of Our Lord