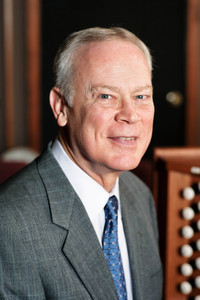 Russell Wilcox graduated from Centenery College of Louisiana in 1975 as an organ major, where he studied with William C. Teague.  He held his first church organist position at age 16.  Prior to becoming a Lutheran at Our Savior, Raleigh, he was Organist-Choir Master at St. Paul’s Episcopal Church in Smithfield, NC from 1990 through 2010.  Prior to that, he was Organist for The Church of the Good Shepherd (Episcopal) in Raleigh from 1985 until 1990.  A native of Texas, Russell served churches in the Houston and Galveston area from 1975 until moving to Raleigh in 1984.  Russell’s other career is Church Business Administrator.  He served Christ Episcopal Church, Raleigh from 1987 until 1999, and Hayes Barton United Methodist Church, Raleigh, from 1999 until the present.  Russell earned a fellowship in the National Association of Church Business Administration in 2005.